Editor’s note: The National People’s Congress (NPC), China’s top parliamentary body, and the Chinese People’s Political Consultative Conference (CPPCC), China’s top political advisory body, have convened its annual sessions, known as the „two sessions“ on March 3-16 2016, which marks a pivotal year as the nation continues on to embark with its reforms and opening up policy, shifting towards a „New Normal“ for economic growth rates, starting its 13th Five-Year Plan for social and economic development over the next five years and confronting challenges on the foreign policy front. How will the NPC address those concerns? What do foreign experts and Overseas Chinese say? The Panview Column of CNTV has invited some of them to express their views on major issues to be discussed at the ongoing two sessions.

By von Ralf Ostner, an Open-Source Analyst, based in Munich, Germany

German train technology stood as one of the global leaders in the past few decades, along with American, French and Japanese train technology. However new developments in China have put an end to that stage.

The leading train technology firms in Germany are Siemens, Adtranz, owned by Daimler but sold to Canadian Bombadier in 2001 and Thyssen-Krupp. They produce the InterCityExpress (ICE), which runs at speeds up to 320 km/h.

The French TGV and Japanese Shinkasen run faster than the ICE. Accordingly, Germany had developed the trans-rapid, a high-speed train at 420 km/h, but with maglev technology. China purchased German trans-rapid technology and built a trans-rapid line from Pudong to Shanghai airport/Longyang.

Beijing had ambitious plans to build a trans-rapid line from Shanghai inner city to Hangzhou and Beijing, but canceled them to rely on more conventional high speed train technology.

Before the 2008 Summer Olympics in Beijing, some Chinese railways were already operating with German ICE technology, including the high-speed railways from Beijing to Tianjin and other cities.

Today the Trans-rapid in Shanghai has become a futuristic tourist attraction, but not an effective means of mass mobility.  Meanwhile, China has strengthened its position in train technology worldwide.

A report in the People’s Daily says that China has developed Permanent-magnet-Synchronmotor (PSM) technology for trains to reach speeds at 500 km/h, or faster and developed by CSR Zhuzhou Electric Locomotive Research Institute in Hunan Province.

They would run faster than the French TGV and Japanese Shinkansen, which are faster than the German ICE and Trans-rapid.  Additionally, China’s Belt & Road initiative (New Silk Road) includes plans for massive expansion of infrastructure and railway systems in Asia, Central Asia, Europe and Africa that would create a huge market for Chinese train technology.

One project that has been built is a railway from southwest China’s Chongqing Municipality to Dusseldorf, Germany. It won’t be the last project either.

China and the European Union have signed a framework agreement to coordinate with the Belt & Road to construct more infrastructures for the EU, which would create new spheres of cooperation between them.

By Ralf Ostner, English and Chinese translator based in Munich, Germany

There hasn’t been much talk on the coming digitalization of the economy, society, known as the 4th industrial revolution. Beijing´s new Five-Year Plan hopes to transform China’s export-orientated, low tech economy into a high-tech industry driven by the domestic market. 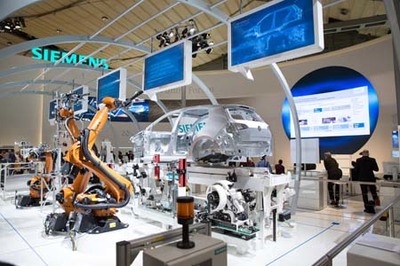 The Chinese government recognizes that digitalization and industry 4.0 are a technological revolution, which would increase productivity and output, allowing China to catch up with developments of these new industries.

Chinese President Xi Jinping had visited the Silicon Valley, Ca., USA and Chinese Vice Premier Ma Kai and Alibaba founder Jack Ma both took a trip to the leading electronics and IT-fair worldwide, CEBIT in Hannover, Germany (CEBIT touted digitalization and industry 4.0), as well as signing a technology cooperation agreement between China and Germany that are clear signals Beijing seeks to gain access to new technologies.

While Silicon Valley and Bangalore, India remain the leading centers of software production and IT technology, Europe has succumbed to a slowdown in IT development.

There is no Silicon Valley in Europe. The lack of innovation, venture capital and cooperation between universities and start ups, the missing military industrial complex in Europe are the main reasons why the continent’s IT economy is still underdeveloped.

While Europeans are good at building cars, ships and aircraft, engineering, chemical and electronics industry; strong IT technology is missing.

Europe had slept through the microelectronic revolution since the 1980s and didn´t create its Microsoft, Apple, Ebay, Google, Facebook, Amazon or giant IT companies as China did with Alibaba, Baidu, Tecent (QQ & WeChat),etc.

Google is thinking about building its own cars and German carmakers could face new competitors in traditional markets. There are many mid-sized IT companies in Germany, so called champions with German SAP as the biggest, but nothing comparable to huge American IT companies.

Many German companies are specialized in industry 4.0 and in its applications in the manufacturing sector; and China hopes to obtain German industry 4.0 knowledge.

There should be a united European digital market with similar standards and European cooperation. A digitalization agency will be set up, which integrates different responsibilities of other ministries and would be under the command of the Ministry for Economic Affairs.

The school system will implement courses for basic knowledge in digitalization, computer programming so every pupil can learn algorithms before finishing school.

In Europe, Germany and Great Britain are the leading countries for startups at the moment and they want to create an innovative start-up culture, comparable to the USA.

What digitalization will mean for a future society is described by Google-CEO Eric Smith´s book, „The New Digital Age“, digitalization will influence the whole economy, transform the daily lives of billions of people, cause a new industrial revolution, and alter relations between nation states and its citizens.

Yet, Smith´s book only highlights some aspects of our future without defining its whole development. Chinese discussions about internet sovereignty would play a crucial role in state-to-state relations.

A big issue for all countries transitioning to industry 4.0 and digitalization will be how they manage massive unemployment. Although startup companies create many new jobs, other jobs will be lost in the manufacturing industry.

Some commentators in the USA and Europe have introduced the model of an unconditional basic income to resolve the problem.

Nevertheless, most countries do not have concepts on how to deal with the labor market impact of the digitalization and industry 4.0. Accordingly, Western and Asian states should learn from each other to solve problems together.

OBOR , the AIIB, multipolarity and the new type of great power relations

China´s One Belt-One road initiative and the Asian Infrastructure Investment Bank have created both: hopes and fears. Underdeveloped countries see an huge opportunity to develop their stagnating countries because the World Bank, the Asian Development Bank and Western investors failed to deliver credits and infrastruture bulidings for decades, especially in Africa and Central Asia.As the world population will increase to 12 billion people in 2050, especially in underdeveloped countries development and infrastructure building becomes a question of survival.While the West concentrated on free trade China has a two-track approach: While encouraging free trade China also has by the OBOR initiative a sort of a new Keynesian New Deal with its massive expansion in infrastructure building. The OBOR initiative comes at a point when Chinese internal market for steel, concrete, construction building becomes saturated and limited. China needs to expand to come in terms with its overproduction in heavy industry, railway technology and construction building. As China has come in an era of normal grothw rates of 7%, it needs new foreign markets for its overproduction. For the underdeveloped countries this creates the opportunity that China will engage in credit spending for infrastructure building in other countries—by this creatin economic hubs and new economic centers at the periphery which will be connected with the economic centers of the world economy.A win-wein stuation.

However, the OBOR and AIIB also creates fears. On the one side there are many countries who fear that China might become too strong and will perform some sort of neocolonialism. Skeptics fear that the underdeveloped countries might become too dependent on China. Even the EU was suspicious when China set up a Eastern European group of 11 countries for its OBOR project as it thought that China would create a Eastern sphere of influence within the EU, , a Chinese backyard in Europe and by this splitting the EU. Meanwhile China and the EU signed a framework agreemnt which coordinates the infrastrure projects of the EU and the OBOR initiative and the European scepticism has vanished and the OBOR initiative is now welcomed by all European countries.

But there also very jeallously groups in the West who dont´t want to see a strong China that might shift the power balance in direction of multipolarity or a new type of great power relations. In the USA the election campaign is strongly dominated by slogans like „Make America great“again and focsues on China as a main competitor, portraying a „China threat“and hopes that confrontation with China could revitalize the old unipolar world order of a Pax Americana.Therefore many of these interest groups will try to portray the OBOR initiative as kind of neoimperialism and neocolonialism and wish that it will have no success.

China still is accustomed to its inner standards of labour and enviroment regulations and an statecontrolled investment enivorment. As it reaches out to other countries it will face labour unions, enviromentalts groups, NGOs, other protectionist goverments and political enviromenmts as diffent labour cultures. Chinese manager get attacked by foreign workes when they tried to implement Chinese work ethics in countries where the workes have a more relaxed and laid-back attitude and not that much Confucianist, puritanist Chinese work ethics.These diffences will naturally create some tensions when executing the projects of the OBOR initiative. China has also a low reputation if it comes to enviroment standars and the air and water pollution in China is a serious problem.Therefore China will face critism of other countries , NGOs, labour unions,envriomentalist groups,etc. when it tries to construct the infrastructure projects.In summary: China should try to avoid the image that the OBOR initiative is expoliting workers, destroying the enviroment,is performing neocolonialsim. If China makes clear that it will comply to certain standards the OBOR initiative will be welcomed by most countries and people as a huge development project, a New Deal for the elimination of hunger, starvation and underdevelopment , as a initiative to reviitalize the sluggish world economy and by this creating welfare for mankind.