Today an article in the Global Times about the opening of the Winter Olympics and about the symbolic meaning of the snowflake and then immediately about the joint Xi-Putin statement. China and Russia are the only two states in the world that oppose US hegemony The China and Russia threat theory must be overcome, as well as cold war thinking and zero-sum thinking and NATO must forego further eastward expansion. New keyword:The 4 consensuses.

By Chen Qingqing and Hu Yuwei 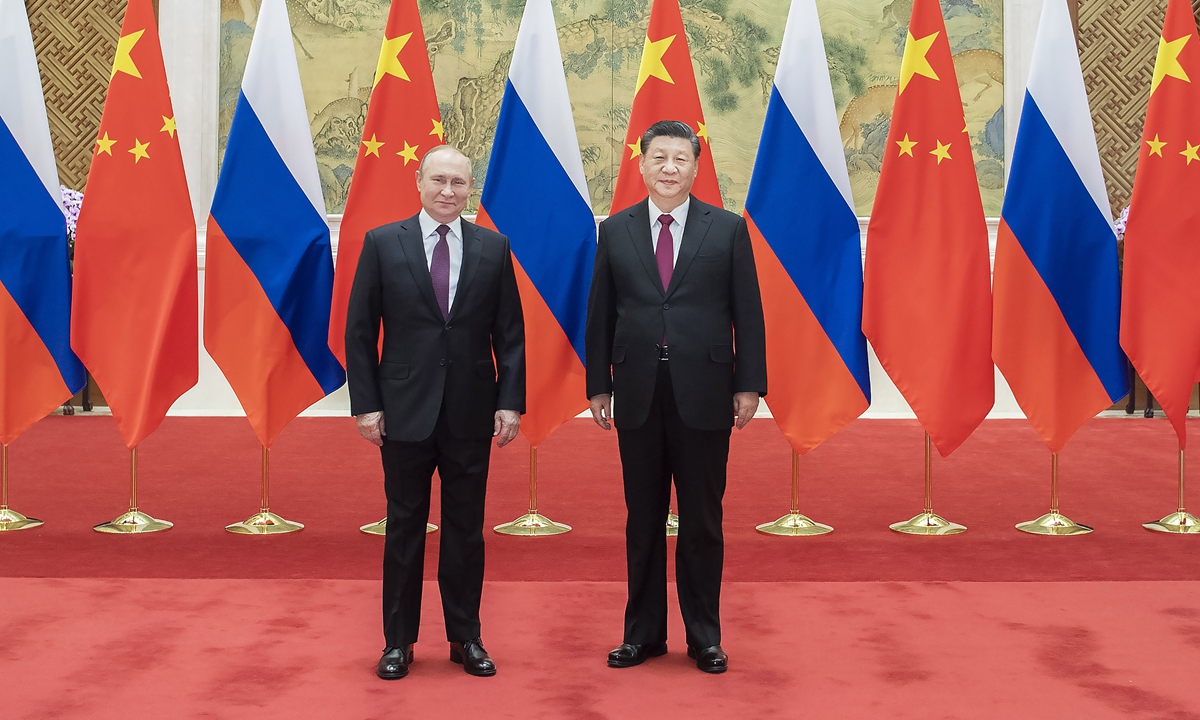 Following the highly anticipated meeting between Chinese President Xi Jinping and Russian President Vladimir Putin on Friday, China and Russia issued a lengthy joint statement that elaborated on shared views and consensuses on major global and regional issues and delivered a scathing rejection of the US-led West’s hegemony that increasingly threatens global security and stability, a move that experts say ushers in a new era of international relations.

During the meeting ahead of the opening ceremony of the Beijing 2022 Winter Olympic Games, Xi stressed the further deepening of „back-to-back“ strategic coordination between the two countries in upholding international fairness and justice and adhering to the four consensuses in supporting each other’s sovereignty, security and development interests to better tackle external interference and regional threats.

The two countries‘ broad consensuses on almost all core issues related to global strategic stability, expressed during the meeting of the two leaders and stated in the nearly 6,000-word joint statement, are extremely rare and will further boost close strategic coordination that helps ensure global stability and peace, Chinese experts said.

The joint statement, which focuses on international relations in a new era and global sustainable development, extensively expounded on common positions on democracy, development, security and order.

The joint statement mentioned US at least five times and contained the two countries‘ common stance on a number of key regional and global issues, including firm oppositions or serious concerns over the expansion of NATO eastward, the West-led ideological clique in the name of democracy, the US‘ Indo-Pacific strategy that threatens regional stability, the trilateral security partnership among Australia, the US, and the UK (AUKUS), and US domestic and overseas bioweapons activities.

In a clear rejection of the US-led West’s hegemony in international relations, the joint statement said that a small number of forces continue stubbornly to promote unilateralism, adopt power politics and interfere in the internal affairs of other countries, stressing that such acts will not be accepted by the international community.

„It’s the first time that China and Russia released such a long statement after the meeting between the two heads of state, which includes all the major issues and strategic questions and shows that China-Russia ties have reached an unprecedented level,“ Lü Xiang, a research fellow at the Chinese Academy of Social Sciences, told the Global Times on Friday.

The world order has entered a new era, the Chinese expert said, noting that in the face of US hegemony – a product left behind by the Cold War mentality – China and Russia are the only two countries that have the capability to safeguard their core interests and sovereignty.

„The solidarity between China and Russia gives a new definition to the world order, as they share the common knowledge about where the major threats to the global stability come from,“ he said.

In the joint statement, China and Russia oppose the further expansion of NATO and called on the North Atlantic Alliance to abandon its ideologized Cold War approaches, to respect the sovereignty, security and interests of other countries, the diversity of their civilizational, cultural and historical backgrounds, and to exercise a fair and objective attitude towards the peaceful development of other states.

They also stand against the formation of closed bloc structures and opposing camps in the Asia-Pacific region and remain highly vigilant about the negative impact of the US‘ Indo-Pacific strategy on peace and stability in the region. China and Russia are also seriously concerned about AUKUS, which allows cooperation on nuclear-powered submarines.

„The US is now touting its Cold War mentality and so-called China threat theory in the Asia-Pacific region, as well as the so-called Russia threat theory in Europe, which prompted China and Russia to stand up against such zero-sum mentality,“ Zhang Hong, an Eastern European studies expert from the Chinese Academy of Social Sciences, told the Global Times on Friday.

Amid the COVID-19 pandemic, unrest across Western countries such as the US Capitol protest last year shows how the illusion that „Western democracy is the destination of human beings“ has collapsed, Zhang noted, adding that emerging countries are showing great vitality and increasingly contributing in international trade and economy, which have also been underscored in the shared views between China and Russia.

The two countries share an understanding that democracy is a universal human value, rather than the privilege of a limited number of countries, the joint statement said. And it is up to the people of a country to decide whether their country is democratic.

Developing countries such as China and Russia gradually found a development model suitable to their own national conditions after the Cold War, while abandoning the West-led Washington Consensus because they saw its inherent defects, which prompted China and Russia to be more vocal on a pluralistic global order, Zhang said.

China and Russia have been reiterating that there is no limit to bilateral strategic cooperation, a new form of partnership between major powers that has clearly made the US anxious. And a crucial factor behind such a limitless development in bilateral ties is the high degree of mutual understanding between the two powerful leaders on global governance.

Putin is the first foreign head of state to confirm his attendance at the 2022 Games last year, and the trip to Beijing was also his first overseas trip in 2022.

Xi said that this rendezvous at the Winter Olympics, which also coincides with spring, will inject much momentum to China-Russia relations, saying that he is willing to work with President Putin to plan a blueprint for and guide the direction of China-Russia ties under new historical conditions.”

Meanwhile, new troubles are brewing in Sino-American relations. Chinahawks in the US Congress want to pass a bipartisan law that the US would also rename the Taiwanese office as it happened in Lithuania. Just in time for the Olympics.

A bipartisan group of US lawmakers on Thursday proposed matching bills in the US Senate and US House of Representatives that would require the US to negotiate the renaming of Taiwan’s de facto embassy in Washington as the “Taiwan Representative Office.”

The mission is currently called the Taipei Economic and Cultural Representative Office (TECRO).

Should the measures become law, any change in the office’s name could provide cover to smaller countries to take similar steps to boost engagement with Taiwan.

It might also create a new rift in US-China relations, which are at their lowest point in decades, as Washington is seeking to push back against what it sees as Beijing’s growing economic and military coercion. The US does not have official ties with Taiwan, but is its biggest international backer.

The bills would direct the US Secretary of State to “seek to enter into negotiations” with TECRO to rename its office as the “Taiwan Representative Office.”

US Senate Foreign Relations Committee Chairman Bob Menendez and US Senator Marco Rubio sponsored the Senate bill, with US representatives John Curtis and Chris Pappas leading on the House version.

“The US must make clear that, despite all efforts by the Chinese Communist Party to intimidate and coerce Taiwan, hostile powers have no right to claim sovereignty over democratic countries,” Rubio said.

Menendez told reporters that the bills were consistent with the US’ Taiwan Relations Act, which defines Washington’s unofficial ties with Taiwan, and demonstrate its support for the nation “to determine its own future.”

“We must take this step to strengthen our diplomatic partnership with Taiwan and counter China’s repeated attempts to threaten and coerce nations around the globe,” Pappas said.

In Taipei, the Ministry of Foreign Affairs yesterday expressed gratitude to the US Congress for its bipartisan support and the enhancement of Taiwan-US relations.

The White House, the US Department of State and China’s embassy in Washington did not respond immediately to requests for comment.

China downgraded its diplomatic relations with Lithuania and pressed multinationals to sever ties with the country after Taipei last year opened an office in Vilnius, bearing the name “Taiwan.”

Beijing calls Taiwan’s status the most sensitive issue in China-US relations and the basis for ties between the two superpowers.”

If the the bill passes and the DDP doesn´t reject the offer, it is very likely that China will act immediately with economic and military measures. German sinologist Professor van Ess thinks this is “fire hazard”. Yes, this will not come without strong reactions. Olympics or not. But that seems to be exactly the intention of Rubio and the other Chinahawks.

The Chinese ambassador to the US also warns of a military conflict:

“US should not misjudge ‘rare warning’ from China on Taiwan question: Global Times editorial

In a recent interview with US media, Chinese Ambassador to the US Qin Gang said that if the Taiwan island authority, emboldened by the US, keeps going down the road for independence, it would most likely involve China and the US „in a military conflict.“ He also compared the Taiwan question to „the biggest tinderbox“ between China and the US.

The ambassador’s words sent shockwaves to the US. US media believe this is a rare and direct warning from Chinese mainland to the US and Taiwan.

This was the first one-on-one interview of Qin as China’s ambassador to the US, and the audience was the Americans. The views he expressed were not only a clear signal to US political elites – he warned them not to continue to play with fire on the Taiwan question or they will face dire consequences – he also intended to let more Americans realize the seriousness of the consequences of „using Taiwan to contain the Chinese mainland“ and who the real destroyer of peace and stability in the Taiwan Straits is.”

BILD reports that Putin will invade eastern Ukraine tomorrow. Well finally he will make it. Then you have clear frontiers. If Putin is that stupid, he will make himself the extended spearhead and then quasi-colony of China, as Erdogan’s Turkey is already doing in slow motion – of course without the Asian loss of face. Then he just has the Donbass or parts of eastern Ukraine, which is why cancellations of North Stream 2 and Swift will follow and he will wake up in the Chinese womb. The Chinese have now also offered Putin an energy pact and a pipeline at the Olympic meeting, which could compensate North Stream 2 . In other words, an invitation for Putin to invade Ukraine. The Chinese want to use Putin to push their own expansion in the Indo-Pacific and Taiwan, and tie down US troops in Europe. Then Swift and NS2 will be canceled and Putin-Russia will then be integrated into China´s  trading system, financial system and incorporated into the digital yuan for his proxy act. Then he has the Donbass or part of eastern Ukraine, bleeds there in an asymmetrical war, then has to get closer to China, and is then bought by the Chinese economic and financial system. Then Putin and every successor will be totally dependent on China, remain only rulers over his army and nuclear weapons, which would have to be financed more and more by China. And whether he will then use them against NATO is questionable, but maybe the last resort, as long as the Chinese don’t object.