Liu He, Janet Yellen meet in Zurich, a bilateral respite that would boost confidence for world economic recovery

With the meeting between Chinese Vice Premier Liu He and US Treasury Secretary Janet Yellen on Wednesday in Zurich, the ice between the world’s two largest economies showed another sign of breaking, as the world’s two largest economies attempt to soothe their relationship that has grown tense in recent months over technology access and other issues. 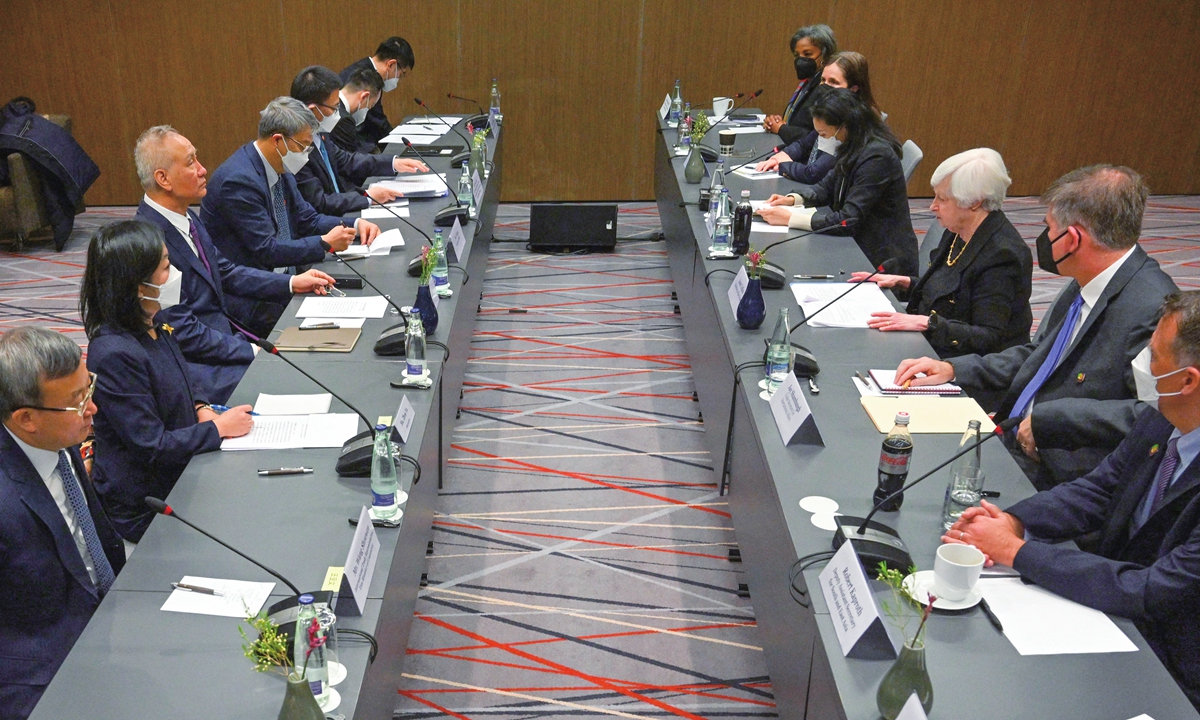 Chinese Vice Premier Liu He and US Treasury Secretary Janet Yellen and their respective delegations wait ahead of their meeting in Zurich, on January 18, 2023. The two sides had professional, in-depth, candid and pragmatic exchanges on the global and bilateral macroeconomic and financial situations. Photo: AFP

The meeting between the  two senior officials of the world’s top two economies is seen by experts as a respite that would offer huge confidence boost for a global economic recovery, particularly at a time of heightened international tensions, while they also called for the US to act responsibly and back the gestures with actions.

The two officials had professional, in-depth, candid and pragmatic exchanges on the global and bilateral macroeconomic and financial situations and on tackling common global challenges on the basis of implementing the important consensus reached at the head-of state-meeting in Bali, the Xinhua News Agency reported.

The two sides agreed that the world’s economic recovery is at a critical stage and it is in the interest of both countries as well as the whole world for China and the US to strengthen macro-policy communication and coordination and jointly address challenges in the economic and financial fields, Xinhua reported.

During talks with Yellen, Liu also expressed concern over the US economic, trade and technological policies toward China and hoped that the US will pay attention to the impact of these policies on both sides, the Xinhua News Agency reported.

China welcomes Yellen’s visit to China at an appropriate time 2023. The two sides agreed to maintain exchanges between the economic and trade teams at all levels, Xinhua reported.

The talks were constructive, according to Xinhua.

The Zurich meeting, taking place one day after Liu addressed the World Economic Forum in Davos, is the first face-to-face talk between him and Yellen since Yellen assumed her post as US Treasury Secretary, although they have held three virtual meetings since mid-2021.

It is also a follow-up to a meeting between the top leaders of China and the US in November during the G20 in Bali, during which they agreed that the two countries‘ senior officials should stay in contact.

„The first in-person meeting between Liu and Yellen marks a broader push to increase bilateral communications following talks between the two heads of state. That’s a positive signal that things are progressing,“ Gao Lingyun, an expert at the Chinese Academy of Social Sciences in Beijing, told the Global Times on Wednesday.

Both overseas media outlets and experts view the meeting as a sign of the two countries‘ attempts to improve their relationship that has been brittle in recent months over issues like the Taiwan question and technology blockade.

Relations between the two countries have been at a low ebb since former US House Speaker Nancy Pelosi’s provocative visit to China’s Taiwan island where she met with secessionists in August. Ties began to thaw after G20 talk.

Li Haidong, a professor at the Institute of International Relations at the China Foreign Affairs University, said that the Liu-Yellen meeting has delivered a clear message of the need for cooperation in the financial and economic fields, noting that on issues where the two sides diverge, the focus is on managing rather than aggravating.

„The meeting of the two senior officials provides a very timely and clear expectation for those who are generally skeptical about China-US interactions in 2023, or believe that there is a high degree of uncertainty,“ Li told the Global Times.

In the last talk between Liu and Yellen via telephone in July, the two sides agreed that strengthening communication and coordination of China and US macro policies is of significance, and it is beneficial to both countries and the whole world.

Li also said that the Liu-Yellen meeting paved the way and laid a good foundation for a possible China trip by US Secretary of State Antony Blinken in February, which could bring further expectation and optimism.

Tian Yun, a macroeconomic observer, said the US is more urgently pushing a thaw in China-US relations because the US, which is in the middle of a disinflation cycle, needs support from China whose economy is spiraling up following COVID-19 response optimization.

Without China’s industrial output, the US is very likely to get stuck in moderate or even severe stagnation that will deal a heavy blow to the country’s economy whether in terms of trade, the dollar’s position or other issues, Tian said.

Gao noted that Washington may have a more urgent appeal for China as it is expected to hit the debt limit soon.

„On the debt issue, the US needs China, the second-largest non-US holder of Treasuries, to help it stabilize its debt market,“ Gao said.

Yellen warned last week that the department will have to start taking „extraordinary measures“ after the US reaches its existing borrowing cap of $31.4 trillion on Thursday, according to a CNN report.

At present, the countries are still split on a number of issues, but experts stressed that at a time of heightened international tensions, even a temporary respite due to a meeting between the senior officials of the world’s top two economies would be a huge confidence boost for a recovery in the global economy.

According to Li, more certainty in the China-US relationship would also bring more confidence in trade and investment with an increasing level of mutual trust at the economic level.

The World Bank recently slashed its global economy growth outlook for 2023 to 1.7 percent from its earlier projection of 3 percent.

On the other hand, the two countries still have a slew of disparities to settle, from the Biden administration’s move to block exports of advanced semiconductor chips and chip making materials to China, accusations over so-called forced labor, and the US‘ ambiguous attitude toward the one-China policy.

Yellen has also called for „friend-shoring,“ or efforts to build a system of trade and investment that limits the extent of engagement with countries that allegedly threaten national security and violate human rights – a statement believed to refer to China.

Such crackdown and hostile attitude is making practical cooperation very difficult to proceed and uncertain, despite friendly overtures by US officials from time to time.

„It’s definitely the US‘ responsibility that the China-US consensus reached in the past can’t come into fruition, as Washington repeatedly failed to implement the agreements in principle they reached with China, particularly regarding the Taiwan question,“ Tian said.

Behind the changing and seemingly self-contradictory US policies toward China lies the country’s political polarization, experts said, noting that the US Congress has a strong function of hindering and counteracting Biden’s China policy, which means there is a real danger that differences at the domestic level in the US will spill over and make China-US cooperation in economic, trade and investment areas difficult.

„Biden’s positive remarks on China are taken very seriously by China, but are they being taken seriously in the US?“ Li asked, noting that the divergences between China and the US have provided room for political manipulation, even though it runs counter to the existing fundamental interests of China-US ties.

Experts urged US politicians to handle the divergences between China and US in a more responsible manner, and avoid the spillover effect of the differences in China policy within the US.

Li also said that when Western media outlets and politicians look at China-US relations, they should not use strategic differences to dominate the entire relationship. Instead, they should seek pragmatic solutions to practical problems and achieve an effect of controllable and gradual easing of China-US strategic competition through cooperation.

NEW DPP CHAIRMAN: The vice president said that the party’s platform to protect and promote democracy would emphasize the economy, societal issues and peace

Taiwan is already a sovereign and independent nation and therefore has no need to declare its independence, Vice President William Lai (賴清德) said at his swearing in as Democratic Progressive Party (DPP) chairman in Taipei yesterday.

Lai, who is regarded as the frontrunner to secure the DPP’s nomination for next year’s presidential election, made the comment after being asked to clarify his cross-strait policy.

Last month, he said it was to promote peace while protecting Taiwan.

As a leading DPP politician who has previously called himself “a political worker for Taiwanese independence,” Lai’s recent comments are seen as marking a shift in the party’s policy regarding Beijing.

The DPP would continue to stand firm on President Tsai Ing-wen’s (蔡英文) four commitments in managing cross-strait ties under his leadership, he said yesterday.

Tsai’s commitments are to defend the nation’s sovereignty and democratic constitutional order, ensure China and Taiwan are not subordinate to each other, resist annexation or encroachment upon Taiwan’s sovereignty, and guarantee that Taiwan’s future is determined by Taiwanese alone, he said.

Asked to comment on his strategy to settle the differences between Taipei and Beijing, Lai said that China’s constant rhetorical attacks, military threats and efforts to alter the “status quo” are to blame for the rise in tensions, which is a problem Taiwan cannot resolve on its own.

Asked about his strategy to settle the differences between the two sides, Lai said that Taiwan cannot be expected to alleviate regional tensions caused by Beijing.

China should seek common ground with Taiwan and join forces in the fight against the COVID-19 pandemic, disasters and other humanitarian crises, which would benefit ordinary Chinese, he said.

Lai — who took the reins of the DPP from Kaohsiung Mayor Chen Chi-mai (陳其邁), who was acting chairman — announced reforms to restore the party’s electoral competitiveness following its rout in the nine-in-one local elections last year.

The reforms include purging corruption and dealing with members accused of breaching academic ethics, he said.

The DPP would improve the role of the democratic process to promote talent, restore its standing among diverse social forces and better respond to the needs of young people, he said.

The party’s platform to protect and promote democracy, peace and prosperity would be carried out by policies that emphasize the economy, societal issues, national defense and peace, Lai said.

The DPP must continue to create blueprints to develop the nation and share the fruits of economic growth without excluding any societal groups, he said.

The party should address the gap between rich and poor people, facilitate the creation of a tolerant and harmonious society, and ensure that peace and stability prevail in the Indo-Pacific region, he said.