After China´s biggest weapon fair in Zhuhai, the Aviation Show which also was performed by new stealth bombers, attack helicopters and fighter jets on the 100 h founding wclebrations at Tianmanmen Square, China shows its next weapon systems: Fighting robots and drones. 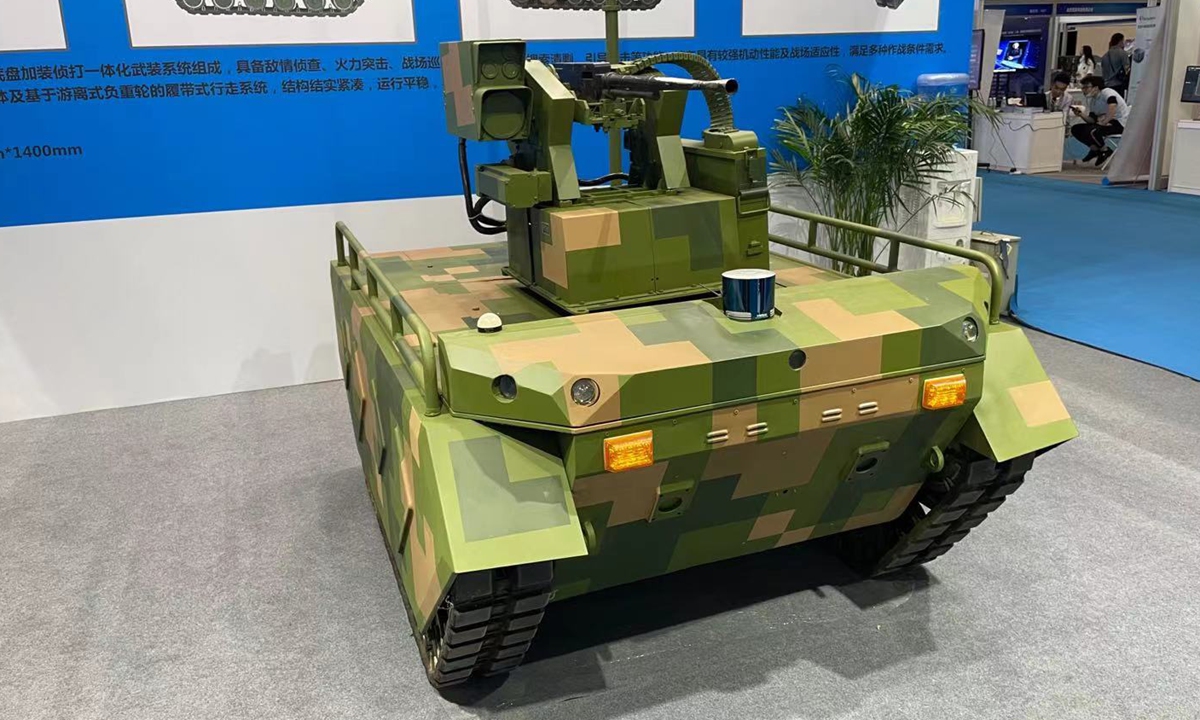 China introduced some of its latest achievements in military intelligent technology by displaying advanced land, sea and air combat robots at an expo in Beijing on Monday, showing the Chinese arms industry’s fast development to meet the demands of future warfare, analysts said.

The event aims to accelerate the Chinese military’s intelligentization development, enhancing its joint and all-field combat capability based on a system of network and information and boosting its integrated development of mechanization, informatization and intelligentization, the institute told the Global Times at the event.

Developed by Beijing North Vehicle Group Corporation under the state-owned China North Industries Group Corporation, the Pathbreaker unmanned ground vehicle weighs 1.2 tons, runs at a top speed of 30 kilometers an hour with caterpillar tracks, and is equipped with an armed reconnaissance system which allows it to conduct reconnaissance, fire assault, patrol, search and destroy operations, as well as strike guidance in complicated terrain at high mobility.

It can be remotely controlled, or automatically follow combat personnel and independently avoid obstacles, an employee at the booth told the Global Times, noting that more advanced types of land robots similar to the Pathbreaker are being developed and will hopefully join the Chinese military service in the future. 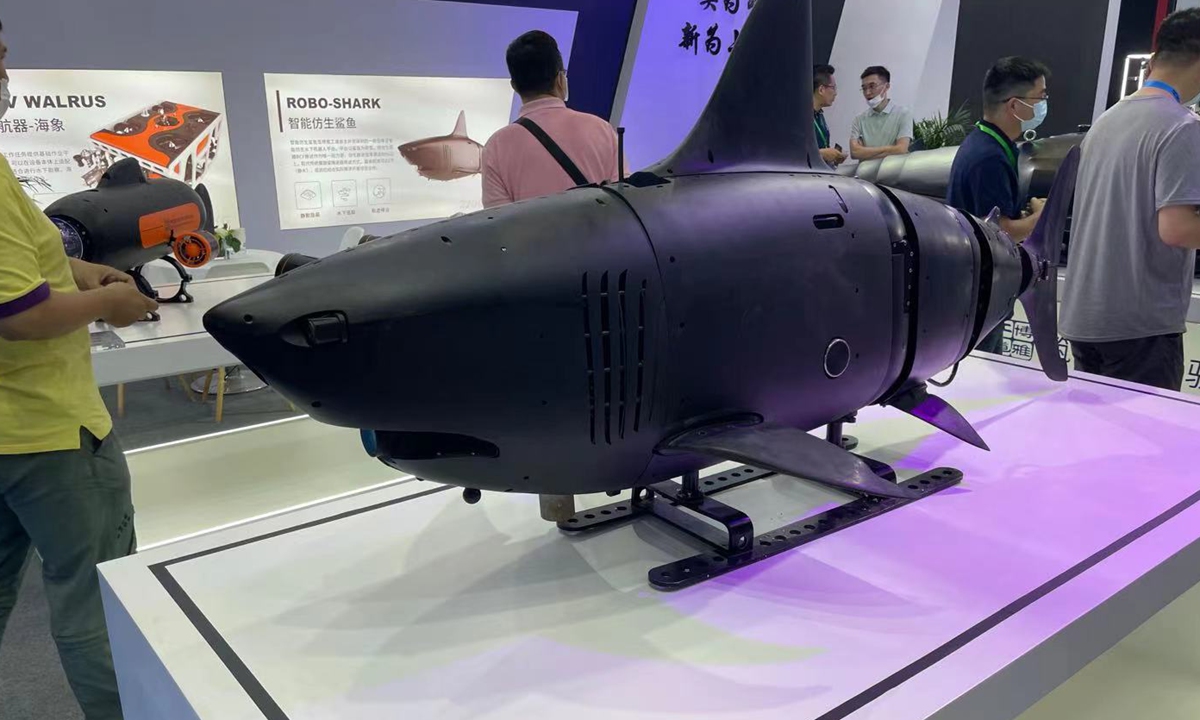 Replacing the traditional propeller, the Robo-Shark’s power source is the bionic tailfin, which can give it a top speed of six knots.

The Robo-Shark is currently on a project with the military based on the latter’s needs, according to the company at the expo. 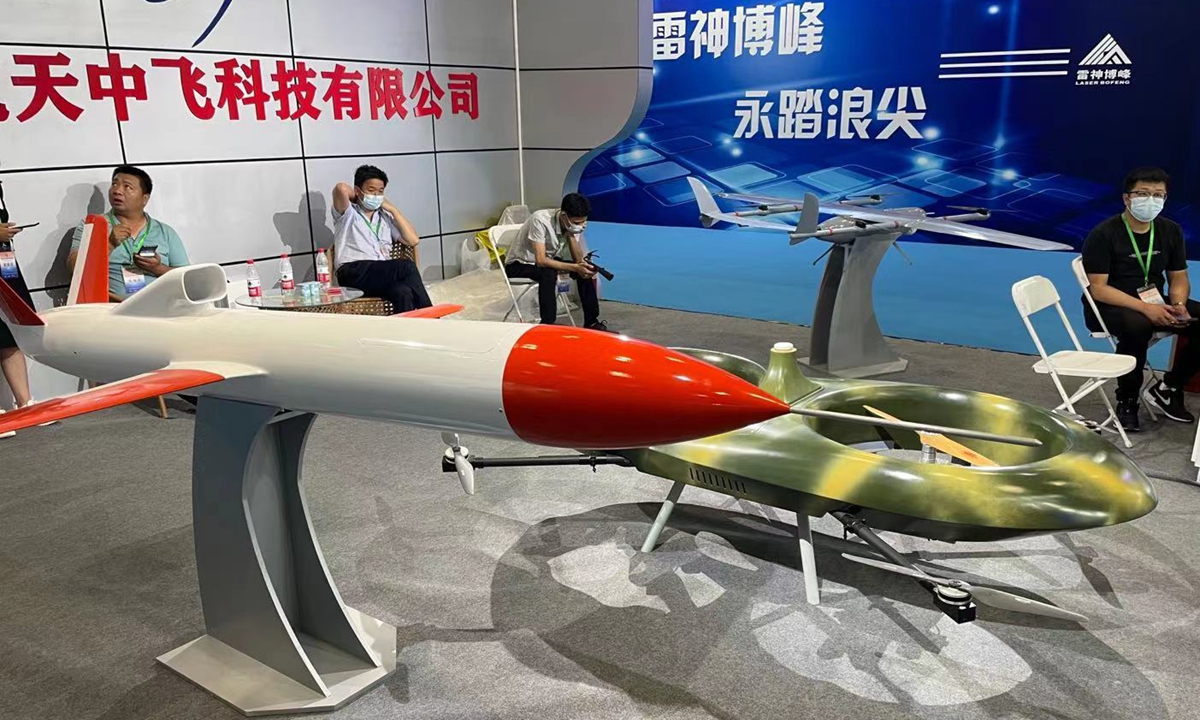 Beijing Aerospace Zhongfei Technology brought different drones to the expo, including target drones that are not only used in training exercises but also in real combat as decoys, and vertical takeoff and landing drones for reconnaissance and patrol missions.

Digital systems used to command and control the combat units were also on display.

However, people in Germany are still talking about whether they should have drones at all, and maybe we will return to club armament or to the halberds of the Frunsberg era.Above all, it will also be interesting whether China believes these new weapon systems could be the first drone/robot counterinsurgency and use Afghanistan and Burma then as test areas to dominate this type of warfare and to be a game changer after there was a lot of talk about the drone warfare in Azerbaijan and to Saudi Arabia. In the PLA newspaper there are now such considerations, but they have not yet received a blessing from the CCP. Can drones and robots make the difference?Or are they just for sale? Would China engage in Afghanistan and Burma with a new type of drone- counterinsurgency that replaces and compensates boots on the ground?

At the moment there is a rumor that Burma’s army wants to get drones. That could become a game changer and Burma become the first experimental field for drone counterinsurgency (if Afghanistan and Obama’s drone war are not seen as such), but it is unclear who could deliver the drones. China has not yet done so and Burma’s military dictator is currently visiting Moscow for a security conference. The question is also if Russia and China have the type of drones suitable for a counterinsurgency in an jungle enviroment and more complicated theater of war than mountains and deserts. Till now drones have been mostly deployed for convential war purposes in Saudiarabia, Yemen and Azerbaijian. Maybe the Burmese people´s army could in return also try to get drones.

Did the NATO troops really fight at all in Afghanistan?. You read about 150,000 German soldiers who were deployed there for over 20 years, but only 59 dead. That’s nothing. In a war you imagine much higher death tolls. Or you have the Afghan soldiers fighting and let them die and how many deaths were among them and the civilians? .Already in the Vietnam War there were only 53,000 GIs dead, compared to 2 million Vietnamese. Can you still wage war if you want to prevent casualties among your own soldiers? Conversely, if NATO waged a war of annihilation against the Taliban, in which one would have accepted significantly higher casualties, would things look different in Afghanistan today, or is that simply no longer politically communicable in the postheroic home front and in pacifist post-war Germany and also the USA? China won´t be so stupid to do it like the Sovjet Union or the USA or NATO: If China believes that instead boots on the ground it could use the new drone and robot systems remains to be seen. However, a political solution and just diplomacy or the New Silkroad won`t be enough incentives for the Taliban. However, the drones and robots shown at the Chinese waepon fair won´t match such counterinsurgency criterias, but were more developed to fight traditional conventional wars against the USA in Taiwan , the South and East Chinese Sea and we are not yet in the age of machines and the implementation of Terminators. However, these new weapon systems will be deveolped as the next step, but that could take longer and the question is if they are so decisive in the era of Unrestricted warfare, cyberspace and space.